Just how Social is Social Media?

As I write this, I’m sitting in a cafe in the middle of Folkestone having my lunch whilst my car is having its annual MOT (a UK test of a car’s roadworthiness). I’m using the cafe’s wifi and my trusty Asus Transformer, and finding it a very easy way of working.

It’s been a very busy, and very interesting week since my last post, revolving in the main around social networking. Indeed, yesterday alone I had very strong leads for three new website jobs, and a very positive chat about helping someone use Google+ more effectively.

And yet I find myself wondering if social media is an effective marketing tool!

Is Social Media quite what it seems?

Why so negative? Well, first of all I would argue that I’m not being negative, but rather doing something that everyone in business should do from time to time, namely reassess the effectiveness of your actions. If you implement a new product, service or way or working, you should be trying to measure its effectiveness regularly, and be prepared to stop if it isn’t having the desired effect.

For example, if you advertise in your local free paper, you should have a process in place to measure how many enquiries you get from that source, and how many of those are converted into customers. After a reasonable period, if it isn’t bringing enough customers in, you can that justifiably stop that particular marketing channel secure in the knowledge that it just wasn’t working for you.

Similarly, with your social media efforts, you should be trying to determine what impact it is having on the bottom line. Of course it’s a lot more difficult to measure ‘awareness’, but even looking at how many website hits are referred from Twitter or Facebook, for instance, will give you an idea how your brand awareness is growing.

Social is not for everyone

I think it’s fair to say that some businesses are better suited to social media than others. It’s also fair to say that some people are more suited than others to social media too. In general, if your target market are particularly active on a network, and you’re comfortable engaging as a person on that medium (only brands that are already strong prosper under that guise), then it’s suitable to use it. Otherwise you need to seriously question if the commitment in time will be worth the return.

Personally, I have found social media a good way of making initial contact with people, and of maintaining awareness after that initial contact. As far as allowing me to demonstrate and prove competence in what I’m trying to sell, probably LinkedIn is the most useful of the major networks. Unfortunately, it also has the smallest reach of what is now the big 4 (Facebook ,Twitter, LinkedIn and Google+). Swings and roundabouts!

The most effective marketing channel

For me, to date, one marketing channel has been far and away the most effective means of generating new customers….informal partnerships. Working alongside other companies offering complementary services brings in more than half of my business. This is a channel that I cultivate carefully and pay a lot of attention to.

But social media has had an impact even on this source of customers. The initial contact with my partner companies was through events organised through social media (e.g tweetups), and even after the initial contact, social media maintained an awareness level between us until we were ready to work together. The goal of social networks to become all-pervasive is becoming reality.

What’s interesting about these relationships is that, whilst social media was the matchmaker, the actual marriage only happened after a deeper connection was made via one or more face-to-face meetings. There is still a trust issue when all your contact with someone is via text. Video can erode that trust issue somewhat, but its not perfect. 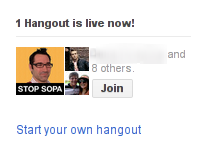 This is where my recent fascination with Google+ Hangouts lies. If you don’t know what they are, have a look at a website I set up to help people new to the medium – The Business Hangout. In essence, they are video chat sessions where up to 10 people can interact at a time. Their uses are virtually limitless, but I see them as a great alternative to face-to-face networking sessions.

Meeting a person, or a number of people, face-to-face in a hangout isn’t quite the same as a ‘real life’ get-together, but it comes pretty close. It’s a ‘one take’ environment, so you get to see all the tics and idiosyncrasies that give you an insight into the real person. I don’t think that Hangouts totally replace tweetups or other forms of networking meetings. However, they also add a dimension in that you no longer have the geographical restrictions that physical meetings impose.

Ultimately, I suspect each person and organisation need to work out the best way for them to use social media. It won’t replace other forms of marketing, but can certainly augment them, sometimes enormously.

After all, as a photographer friend of mine always says…

Social media gives you a little insight into the other person, be the a potential supplier, partner or customer. For me it’s the triage process before I invest significant time and effort in a face-to-face meeting, although Hangouts might just make that meeting unnecessary. You may find a different use, only you can really work out what that use is.